On New Year’s Eve, with some trepidation and copious amounts of excitement, I set off with my Spanish hiking partner, Mikel, to climb Uchitel peak in Ala-Archa National Park, 40km outside of Bishkek. The name Uchitel means teacher in Russian. It’s a 4500m peak, and the easiest out of the flock of other jagged high peaks.

This would be by far the highest I had ever been and speaking to people who had climbed it in summer recounting the dizziness, nausea and tiredness it was a challenge that needed to be taken seriously, especially in its now freezing and icy condition; even if the professional mountaineers just sniff at it, with all their professional mountaineering equipment…

So we set off from Osh Bazaar, Bishkek, on the 265 Marshrutka (minibus) with our soviet-era crampons, tent, sleeping bags and matts, food, camping stoves, and spare warm clothing. We were prepared for a possibly -30 night up on the mountain.

We knew from a previous hike that it was a day’s distance to the Ratsek cabin at 3350m altitude, but had been told the cabin was full that weekend, hence the tent.

We arrived in the national park at 11am, but with another 15km to the beginning of the climb, we hitchhiked on a water truck that was driving up the mountain to collect fresh water for the Tian Shan bottled water company that fills most shops in Kyrgyzstan and Central Asia.

There aren’t many things as soul-restoring as being in the mountains, you realise the brutal power of nature required to create such structures, you know they’re older than humanity and will be there long after we’ve gone. They’re always a magical place to be and you know you can only stay there for a limited time; making you all the more grateful for being there, ready to absorb every glimmering flank, ridge and peak. 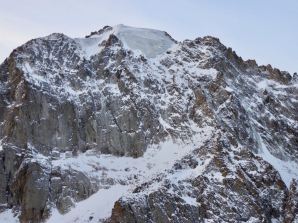 In powdery, paper white snow, we began the climb; following the path of other hikers. Weighed down by our packs, we were continuously taking off layers as the physical effort warmed us up. It’s a delicate balance between being warm and sweating; your clothes get wet, which makes you dangerously cold when you stop. Layering is a must.

We reached the Ratsek cabin just after 5pm with the sun dropping down below the razored peaks that surrounded us, cocooning us in the Ak-Sai canyon with the Ak-Sai glacier stretching before us up to another majestic peak named Korona, a harder peak requiring ropes, ice axes and crampons.

The cabin was busy with a gaggle of 20 or so Russians paying for their mountaineering experience with guides, prepared food and beds. We managed to get two beds in the unheated cabin for the equivalent of £6 and a large bowl of hot soup. When contrasted to the freezer-like conditions surrounding us, it might have been the best bowl of soup I’d ever had. Finger-crippling cold crept through the cabin, every breath filling the air with crystallised vapour. Our painfully cold feet made us so grateful for a bed in what was an upmarket freezer.

At 6am, we woke to frozen water, frozen bananas, frozen oranges and worst of all, frozen boots. I left the beautiful warmth of my sleeping bag and forced my feet into my concrete clogs. We had our breakfast, waited for a little bit of light, and set off at 8am. The peaks surrounding us were blocking the warmth of the early-morning sun, and we had 1300m of climbing to do in approximately 2km to make it to the peak.

A steep, steady climb for two hours and we were already towering above the cabin, rewarded with the awe-inspiring view of the glacier below us, it’s cracks and crevasses laying perpendicular to the direction of its slowly-creeping and unstoppable movement downwards.

We passed people on the way up who had slept on the peak at 4500m in the wind and -30°C temperatures to help them acclimatise for larger, more difficult peaks, making us feel like utter schoolboys with our basic cold weather gear and walking boots. Encouragingly, these other mountaineers informed us we wouldn’t need our crampons to get to the peak.

The higher we got the more the altitude started to affect me, a pit in my stomach and the feeling of empty lungs slowed the pace of the ascent, a headache, slower thoughts and a tinge of dizziness continued to make me aware that, although a non-technical climb, this required my full attention. A a slip at certain points would prove to be more than painful. 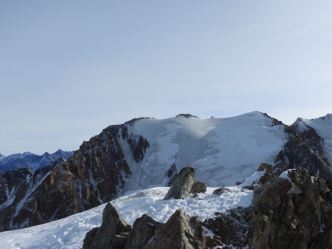 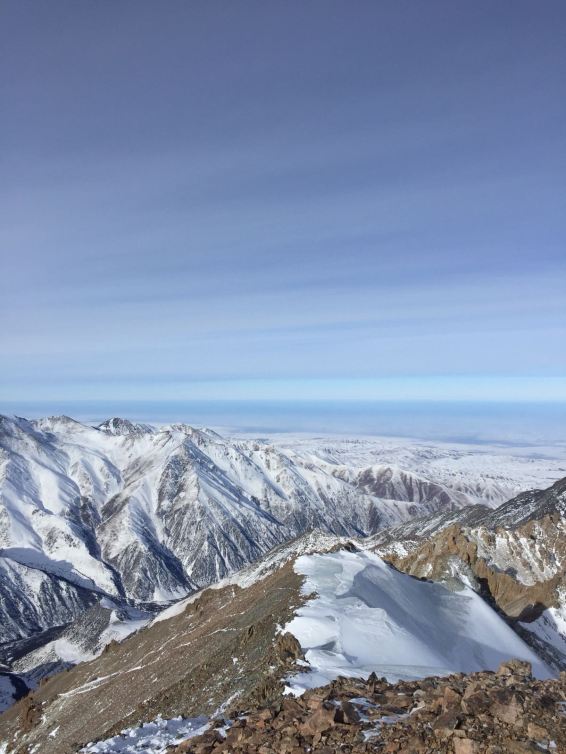 The view, the view, the view is what you think when you get to a peak. It sugar coats that sense of achievement you have of climbing pointlessly up a colossal slab of rock, only to then walk back down. Yet it isn’t pointless; what does it mean to be human if you never push yourself? A mountain is a perfect way to carefully push yourself step by step, to make you realise life isn’t fluffy and you’re responsible for your own safety. Every step is an important decision on the mountain.

After some photos, congratulations and the sharing of some food with a group of Russian climbers who had just made it to the top, we began our descent, slippery and hard on the knees.

We made it back to the cabin at 3pm, had an hour for lunch and then began our 3-hour dusk hike back down to a place we could possibly get a taxi from… on New Year’s Eve at 7pm. We finally arrived back in Bishkek at 11pm, just in time for some celebrations and beers into the early morning.

Over the course of my trip, I’m hoping to raise at least £5,000 for CLIC Sargent and Hope and Homes for Children.

Please give what you can by clicking the image below: